Isaac Garcia-Sitton was born in Barcelona, raised in Panama and moved to Canada in 2007 during his tenure as the Consul General of Panama in Montreal. As Director, International Education and English Language Institute for the York University School of Continuing Studies, Isaac leads recruitment efforts, develops partnerships, and provides the overall business development and strategic direction at the Institute. As one of the oldest, largest and most respected English language institutes in Canada, it offers a diverse pre-university pathway for students who are new to the English language to achieve a level of fluency required for doctoral studies. 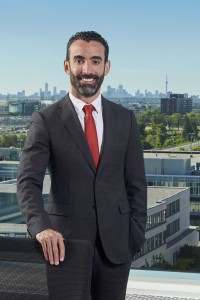 The School also relies on his expertise to ensure that its post-graduate certificates offer international students the support required to excel academically and in the Canadian business environment. One of Canada’s largest and most multicultural universities, York is home to more than 60,000 students, faculty and staff who trace their roots to 157 countries globally (including every country in Latin America). The Latino presence at York is strong and visible through many student associations and clubs. From its earliest days, Latin American and Caribbean Studies (LACS) at York has been organically linked to the growing Latin American and Caribbean community in Toronto and Canada, effectively establishing York as a centre for research and social involvement in Latin America and the Caribbean. York boasts the premier research institute on Latin America and the Caribbean in Canada (CERLAC), and extensive institutional linkages throughout the region.

Growing up in Panama has shaped Gacia-Sitton’s world view. “The socio-economic disparity in my country sparked in me – at an early age – a sense of responsibility to try to change such inequalities,” sayings Garcia-Sitton. “My experience has shown that changes can only be reached through education and the promotion of social integration via inclusive policies that reduce economic inequality and poverty, and promote sustainable and equitable development.”

He was recently selected as the only Canadian recipient of the Organization of the American States (OAS) and Instituto de Empresa (IE) scholarship to support the development of Canada’s education sector. Last year, Garcia-Sitton was recognized by the Government of El Salvador with the Ministerial designation “Amigo de El Salvador” for his support of social development initiatives in the Central American nation. He has been invited to speak at many international meetings on topics as diverse as social inequalities in Latin America, the rights for people with disabilities, and Latin American business practices.

Read the original article by Latinos Magazine on page 18.